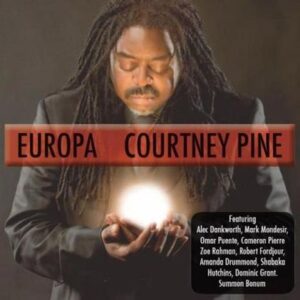 Cover image for Courtney Pine”s Europa, 2011. Click the image to see the LondonJazz review of the album.

a??I have always said that I am Afro, Caribbean, European, thata??s who I am… To me, it means I shouldna??t feel that I cana??t exploit each cultural thing and make it one, which is how I think the United Kingdom should be.”

“Europe is a lot more close than what is being proclaimed at the moment… We live on an island and it does work to say this is an isolated state, but it isna??t, there is so much cross fertilisations of ideas, concepts, identities a?? I dare anybody to have a DNA test and then find out they are from Holland or Sweden! This is how itA?is across Europea?? (Pine quoted in Nicholson: 2011, 20).

a??One of the effects of globalisation in the last two decades has been the desire to express collective identity through nationalism. Just because people everywhere wear Nike trainers and drink Coke does not necessarily mean they are less fiercely concerned about their cultural identity a?? indeed, many are prepared to fight and die for their nation, religion, territory or culture or whatever aspect of cultural identity is perceived to be at stake.a?? (Nicholson: 2011, 20)

In my paper, I argue that these words fail to grasp the fluid and contested nature of identity today and question why identifying with a national culture is more important than other forms of identification. These quotes demonstrate why Rhythm Changes is important to European cultural studies, not only in examining how writers and artists actively reinforce or challenge stereotypical representations but – perhaps more importantly – by exploring why concepts of nation, race and ethnicity continue to have currency in todaya??s world.A? What are your thoughts on this?