Last week I experienced the full force of cultural dynamics at work… A?and all within walking distance of my home in a Yorkshire Pennine town!A? For me, the visit of the John Tchicai Trio to the Trades Club in Hebden Bridge demonstrated how jazz can take on a significance that goes beyond the physical and temporal parameters of performances themselves.

The event threw up a range of interesting examples of how jazz scenes are not only born out of cultural exchanges and the convergence of widespread influences but also how performances themselves can develop a symbolic quality, enabling people to experience their environment in a different way.

The event had a particular resonance for me as a scholar and jazz fan – Tchicaia??s work is of direct interest to my two main ongoing research projects – my book project Beyond A Love Supreme for Oxford University Press, which examines the impact and influence of A Love Supreme and late Coltrane recordings, and the Rhythm Changes project, which continues to provide insights and analysis into jazz practices and the dynamics of European culture.A? Tchicai was one of the central players of the a??New Thinga?? in jazz in the mid-1960s.A? His playing featured on a number of influential albums including Archie Sheppa??s Four for Trane and Coltranea??s iconic album Ascension and he was the founder of the New York Contemporary Five and a member of the Jazz Composers Guild, immersed in a vibrant and politically-charged scene that included musicians and artists such as Archie Shepp, Sun Ra and Amiri Baraka.

Meeting John the morning after the gig, it was fascinating to talk both about hisA?life in the political hotbed of the US in the 1960s andA?about his experiences as a Danish national living in different locations and working with musicians from different cultures and settings.A? Tchicai talked about his cultural influences and the concept of national sound a?? moving from Denmark to New York in 1962 and now living in France, he had clearly developed a number of valuable insights into national jazz scenes and transnational interactions. A?As part of our conversation, we talked about the way in which, as an artist, you become aware of subtle differences in approach between musicians working in different scenes and national settings.A? However, there is an obvious romance and pigeon-holing associated with national sounds, particularly when discussing European jazz; Tchicai made some interesting observations about the jazz scene in Scandinavia in the 1960s, claiming that, in Copenhagen in particular, there was no sense of boundary or policing of different types of jazz, and this creative environment led to some valuable interactions, cross-fertilisations and cultural exchanges. A?During this time, Tchicai encountered figures such as Albert Ayler and Bill Dixon during their visits to Scandinavia and received personal invitations to move to the US.A? Relocating to New York, Tchicai commented on the race politics of life at the time stating that, as a Dane, he was surprised by the change in context but didna??t feel the same way about the black nationalist agenda as colleagues such as Archie Shepp. 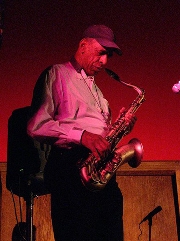 Tchicaia??s appearance at the Trades Club was also the result of other types of cultural exchange taking place.A? Now living in the South of France, Tchicai has developed a friendship with neighbours who are also of Danish descent, and those neighbours happen to have a daughter living and working in Hebden Bridge.A? A?In turn, Tchicaia??s performance brought together a small Danish ex-pat community, a film maker, a German record producer who had previously recorded Tchicai as part of a German festival, and a variety of musicians and artists, all of whom live within five minutes of the venue but who had not met until the event itself.A? Finally, and in some remote way, the fact that that the performance took place in a venue such as the Trades Club, with its Trades Union history and socialist ideals, offered a window in to thinking about the political backdrop of the 1960s, and an appreciation of the power and impact of performances of jazz musicians working as part of the New Thing itself.