Sep 01 2010 Published by Petter under Events

At the Nordic Jazz Conference in Helsinki a couple of weeks ago, I did a comparative analysis of the Norwegian and British jazz scene. Highlighting at the one hand particular idiosyncrasies, and on the other certain successful collaborations across the North Sea. I tried very hard of course to balance the argumentation between subtle musical curiosities (British humor) and blatant stereotyping (London urban cool vs.

At one point (or two) I did mention a??The Nordic Tonea?? (albeit with high eyebrows and a a??ironica?? tone of voice) and its impact on particularly the commercial side to selling Norwegian jazz abroad. I also mentioned the ECM aesthetics, and how ita??s hard for Norwegian musicians not to be drawn into certain ways of playing (due to marketing, expectations, education etc.). As expected, the stereotypes of a??The Nordic Tonea?? became the topic for discussion after the talk, and I think we reached an amicable understanding that it would be wise for the RC team to look into national stereotyping (which we are!).

Now, this is where it gets interesting: During our debate of the likes of Norwegian mountain jazz I referred to a film clip of Bugge Wesseltoft (shown earlier in the day) where Bugge goes into stereotypical marketing speak of the a??cold melancholy of the Norwegian minda??, upon where I commented that this was probably the businessman in Bugge talking (not the musician). 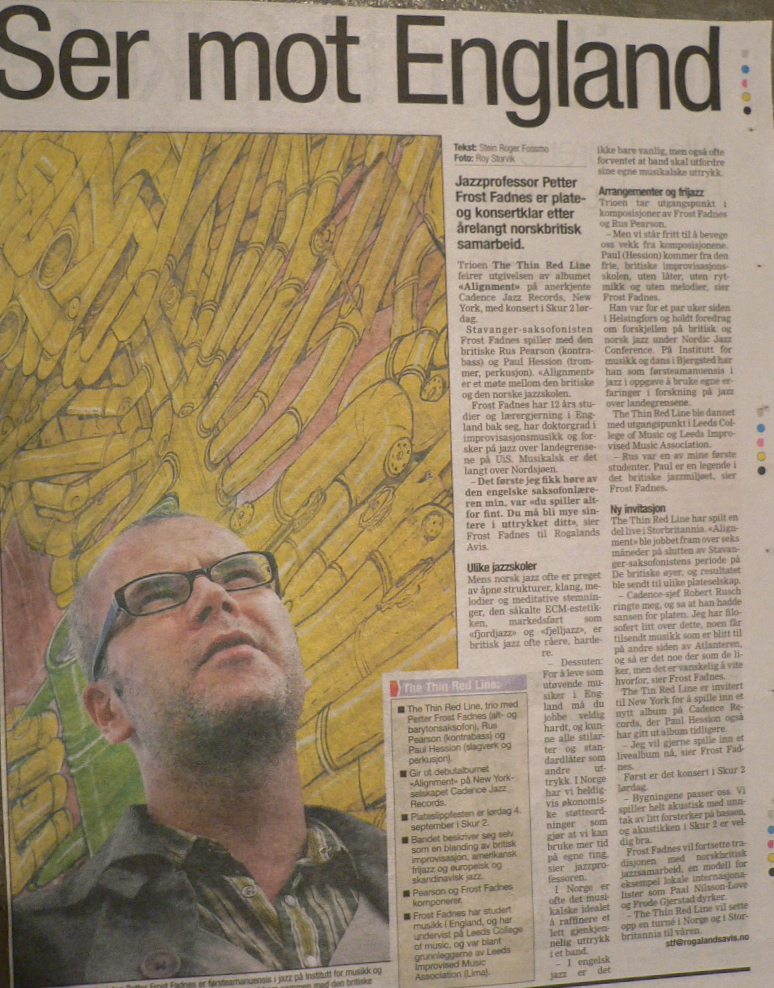 With this in mind, I was interviewed a couple of days ago for a Norwegian paper in relation to an album release with the Anglo/Norwegian trio The Thin Red Line, and I was of course asked to categorize differences in the two national approaches to playing jazz. As in Helsinki, I was cautiously trying to highlight subtleties (yes, I mentioned the ECM aesthetics, even mentioned Garbarek), and I even suggested that British jazz sounds angrier and has more of an edge often lacking in the Norwegian sound. The problem with talking to journalists is that they tend to only jot down the first half of your argument (and leave out the a??on the other handa??), which provides punch lines for the article but gives absolutely no impression of reflective, academic thinking. The result is (and this is where I should apologize to Bugge whoa??s interview was probably edited to pieces), that the article portrays me as the preacher of a??The Nordic Tonea??, ECM, mountains and fjords, and that I seemingly have done nothing to move jazz research beyond national stereotyping.