MOSAIC is a band led by Sean Gibbs featuring some of the most exciting players from the Birmingham jazz scene. They play compositions of Seana??s that encompass influences from the jazz tradition alongside the earthy grooves of blues, rock and whatever else takes their fancy. 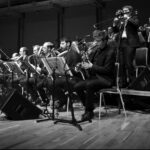 Multi-Instrumentalist and composer Mike Fletcher leads his 12 piece jazz orchestra in a performance featuring the premiere of a ne
work written by the acclaimed Scottish composer Anna Meredith.

AlongsideA?this new work the orchestra will perform music written by their leader whose primary interest is in balancing composition with improvisation, creating music that has a a??free-wheeling, experimental atmosphere and the real vibrancy that music being created in the moment can have.a??

As a nominee for the ECHO Rising Stars 2014/2015 programme Mike Fletcher has recently appeared at the Barbican Centre as part of the London Jazz Festival, Hamburga??s Laiezhalle and the CBSO Centre in Birmingham.

Anna Meredith is a composer, producer and performer of both acoustic and electronic, whose sound is frequently described as maximalist and uncategorisable. Her music has been performed everywhere from the BBC Last Night of the Proms to flashmob body-percussion performances in the M6 Services, PRADA fashion campaigns, numerous films, installations and documentaries, pop festivals, clubs and classical concert halls worldwide and broadcast on Radio 1, 2, 3, 4 & 6.