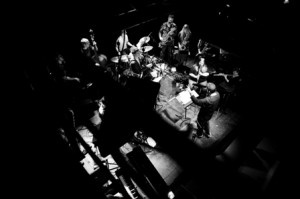 The firstA?in a series of European Rhythm Changes concerts took place on 14 January, as Irish composer and bandleader Dave Kane conducted the Bjergsted Jazzensemble atA?Tou Scene in Stavanger, an ex-brewery that has now become a cultural centre and hub of creativity in the Norwegian city.A? a??It was one of those magical live moments where space, audience, and musicians, blend together into a genuinely communal experiencea??, said Principal Investigator Dr Petter Frost Fadnes.

The concert, co-promoted by Tou Scene and the University of Stavanger,A?generated a large amount of press interest, resulting in one national radio broadcast on NRK P2’s Kulturnytt, one newspaper article, and two magazine articles to be publishedA?shortly.A? Frost Fadnes continued, a??All the journalists Ia??ve spoken toA?are genuinely interested 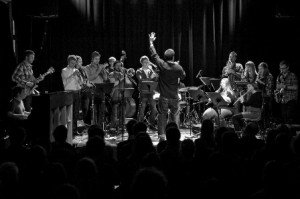 in the potential outcome of the Rhythm Changes comparative study. The question of, for example, whether particular aesthetic qualities stand out betweenA?different ensembles, cities or national scenes, seems to fascinate the public, professionals and students alike.a??

The NRK P2 Kulturnytt show, broadcast on 14 January,A?features interviews with Petter Frost Fadnes and Dave Kane as well as music from the event.
—
The programme can be accessed for a limited period via the following link:
ttp://www.nrk.no/programmer/sider/kulturnytt/