Apr 10 2013 Published by George under Events

And here is another good deal for delegates coming to the Rhythm Changes conference this week in Salford. After the opening reception at CUBE Gallery in Manchester city centre on Thursday, we”ve arranged a special discount for a terrific jazz gig at one of the city”s leading live music club venues, the Band on the Wall. (25 Swan Street, in the Northern Quarter.) It just keeps getting better and better …

A very special jazz double bill featuring the spectacular and visceral mash-up of rock, jazz and dance music of Troyka plus the Anton Hunter Trio whose debut at last year”s Manchester Jazz Festival got everyone talking about this immensely creative new outfit. 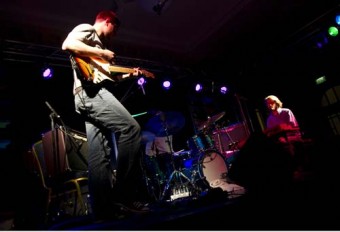 Troyka are Chris Montague (guitars and loops), Joshua Blackmore (drums) and Kit Downes (organ), three young musicians based in London whose intense live shows have seen them hotly tipped to follow in the foot steps of Polar Bear and Portico Quartet and become the next young band to explode from the capitala??s fertile jazz scene. A multi-textured trio with a febrile imagination where no role is pre-defined, their music twists and mutates in an ongoing dialogue inspired by a shared love of Aphex Twin, the angular world of iconclastic New York saxophonist Tim Berne and the blues-jazz-rock groove of legendary Steely Dan and Billy Cobham guitarist Wayne Krantz.

The Anton Hunter Trio made its debut at Band On The Wall at Manchester Jazz Festival 2012 and showcases material at the borders of composition and improvisation. More introspective and spacious than his work with HAQ or the Beats & Pieces Big Band, there is, as ever, still plenty of room for freedom and exploration within the structures, whilst not letting go of strong melodies. The trio is completed by his “Skamel” bandmates Johnny Hunter on drums and James Adolpho on bass.

This concert begins at 8pm but the venue”s Picturehouse Cafe Bar is open earlier for delicious food and drinks. Full price tickets at the door are A?14.00 but Rhythm Changes delegates pay A?8.00. Yes, in these hard economic times, we are still supporting venues, live musicians, but also looking after our delegates!