This strand will examine how jazz has developed in each partner country and how the music relates to arts policies, cultural infrastructure and education.

Research Questions
How has the cultural canonicity of jazz developed over time, in changing circumstances and amidst changing available media?

How are distinctions of high and low culture reinforced or challenged within transnational jazz contexts?

How do different versions or interpretations of jazz history compete and underpin opposing ideological evaluations? 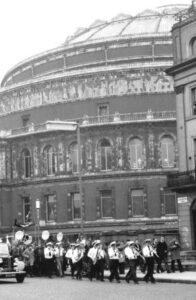 Since its inception, jazz has been at the centre of discourses about European identity, politics and cultural value, with the music developing a variety of roles within different national settings.  From the outset, jazz has offered a model from which to examine transnational identity, uniting musicians and audiences across geographical boundaries in their passion for African American-derived music.  And yet, the music has also provided a site for national and regional differences to be cultivated.  For example, historically, the development of jazz in Britain was inevitably affected by the nations geographical and cultural positioning, a triangulation of influences between North America, the Caribbean and Western Europe; as George McKay suggests, characteristics of jazz in Britain throughout the 20th century largely developed through a variety of transatlantic interrelationships (McKay: 2005, 5).  Furthermore, the Ministry of Labour ban on visiting American jazz musicians had a heavy impact on the development of jazz culture in Britain.  The ban, which stemmed from the early 1930s to the mid-1950s, severely limited the influx of overseas artists into the country.  In the 1930s, for example, the BBC not only continually sought to preserve a sense of the highbrow in its choice of musical programming but also strongly urged singers not to use American accents during performances, and even tried to ban crooning.  Even though, in reality, several distinguished US jazz stars visited Britain during this period, their limited representation within the media and the overwhelming sense of preserving the integrity of British culture, affected the growth and dissemination of jazz. This state of affairs arguably created a paradoxical environment where musicians and record collectors alike developed an interest in US jazz as authentic music whilst also developing distinct localised jazz scenes within Britain itself.  Local scenes, for example, often stemmed from other roots or fed into musical practices that were antithetical to the evolutionary chronology of jazz in the US, serving to create a distinctive body of post-war British jazz performers.

Building on these observations, the development of jazz cultures in Europe, and similarities and differences between national scenes, have never been studied in a comprehensive way.  This strand addresses the need for a complex and multifaceted study of jazz cultures, examining how the concepts of cultural canonicity, history and ideology change in different European contexts and analysing the wider inferences that can be drawn from this.