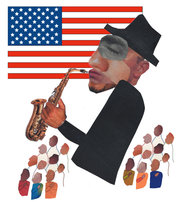 With the first Rhythm Changes conference just around the corner, Ia??ve been reading a range of texts which feed into the event theme of Jazz and National Identities, ranging from Roberto M. Dainottoa??s Europe (In Theory) to the latest edition of Philip V. Bohlmana??s Music, Nationalism, and the Making of the New Europe published this year. Bohlman describes the interplay between music and nationalism as a type of love-hate relationship and suggests there are three general reasons why the impact of nationalism on music leaves many people feeling uncomfortable a?? herea??s my paraphrase of his hypothesis:

1. There is an unwillingness to accept that music can or should be used in service of the nation-state. Audiences like to believe that music is apolitical and so, by tying music to the nation state, the mystery a?? or autonomy a?? of art is challenged.
2. Nationalism trivialises music, as a type of levelling occurs where individual, local or regional difference is eradicated and music becomes stereotypically kitsch. Music that takes on markers of the state inevitably becomes embarrassing, ugly and repulsive.
3. Music that is used in service of the nation-state feeds into all that is dangerous and destructive. Nationalist music has a ritualistic nature that serves to erase the voice of difference; effectively, it can come to represent racism and prejudice. (Bohlman: 2011, 11-12)

During the conference, I will be keen to see how jazz feeds into these debates and how the music has been framed in relation to different national settings. This could range from discussions of jazz as Americaa??s a??Secret Sonic Weapona?? during the Cold War to European jazz sounding like the embodiment of Scandinavian landscapes. The programme promises an array of perspectives and some fascinating discussions. Bohlman concludes:

What do you think?