On Sunday 16 June, I hosted a public conversation with Django Batesa?? BelovA?d before their concert at the Holmfirth Arts Festival in West Yorkshire. Bates was joined on stage by bassist Petter Eldh and drummer Peter Bruun and I started off the conversation with a question about the relationship between place and creativity. We moved from an examination of the differences between festivals and venues a?? how performing contexts shape the direction of music – to exploring how the Danish jazz scene had led to the formation of the trio. BelovA?d formed in Copenhagen during Batesa?? time at the Rhythmic Music Conservatory and their Charlie Parker-inspired albums developed out of an event organised by the Copenhagen Jazzhouse. 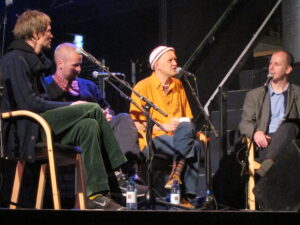 During the talk, we discussed concepts of inheritance and identity, how the a??weight of historya?? can often hamper the creative process. In my first book, Jazz Icons: Heroes, Myths and the Jazz Tradition, I suggested that official histories of jazz are too fixed in nature and the presence of iconic figures has spawned a number of imitative projects which can be read as too indebted to past masters. Exploring these themes with BelovA?d, Bates was keen to stress the difference between love and reverence for an artist, and suggested that this was the key to his success; using Parkera??s music as a springboard for his own creativity without feeling restricted by official narratives or expectations about how to draw on music of the past. The trio touched on ways in which working transnationally encourages this kind of thinking.

The conversation moved on to a consideration of what it means to be an artist and a refusal to be pigeonholed and the trio discussed their musical and compositional processes. Bates will be developing the BelovA?d project for big band for the BBC Proms in August and the translation of this material has presented a number of challenges for the group. Both Bruun and Eldh have such a close working relationship with Bates, feeding off each other and taking the music in different directions, that the inclusion of additional musicians has led to the need for the clarification of ideas and the sharing of established processes beyond the trio.

We concluded our discussion by considering the dynamics of cultural influence and the flow of ideas. I asked the trio to reconsider the well trodden idea that creative influences flow in one direction – namely that musicians of the present are influenced by the great masters of the past a?? and posed the question of how Batesa?? music could encourage us to think about the past in different ways. For example, I asked how does BelovA?d encourage people to listen again to Charlie Parker with fresh ears and think differently about Parker? Although Bates acknowledged that all our listening is tempered by present values, he suggested that associations with his own music (ranging from compositional complexity to playful humour, from political statement to improvising in the moment) could be used as a strategy for revising our readings of the music of the past.