May 26 2016 Published by Sarah Raine under Conference, Exhibition

You may have had the opportunity to view the One LP Project exhibition by William Ellis at the conference, consisting large portraits in the atrium area and a series of photographs adjacent to the lecture theatre.

One LP is a unique and critically acclaimed portraiture photography project that explores the inspirational qualities of music recordings and the impact that they have on people’s lives. It consists a portrait of an artist with a favourite recording. Each photograph is accompanied by a short interview that explores the meaning and value to the subject.

The One LP project is offered as a bespoke art event consisting of a pop up exhibition with seminar/workshop options.The presentation concept has been developed to appeal to arts, music, literary organisations and educational settings.

The flexibility of its presentation modes means that an event can be tailored to your programme, either as a stand-alone or as an integrated activity.

“One LP is a marvellous idea, superbly executed. The range of subjects (human and musical) is wide indeed, often surprising, sometimes touching, always interesting. May it go on and on!” 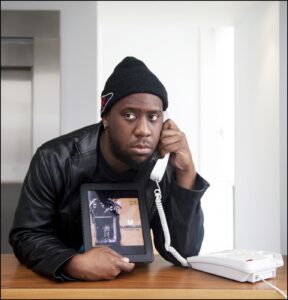 This photo is Copyright William Ellis. All rights reserved.

One LP is a unique and critically acclaimed portraiture photography project that explores the inspirational qualities of jazz recordings and the impact that they have on peoplea??s lives. Each artist portrait features the subject holding a recording that is of fundamental importance to them. The photograph is accompanied by a short interview that explores the meaning and significance of the selected album.

a??One LP is a project that commenced in 2010 as a response to conversations with musicians about their relationship with the music of other artists heard via recordings – and in particular the albums that had profoundly moved them.A?As a conversation is of course transient – committed only to memory a?? I sought a format to document my interactions with artists.A?The One LP series is the result a?? something that reveals the matrix of jazz. Perhaps more mellifluously, a journey into anothera??s soul: the album that each person selects is a part of them: their past, present and future.a??

The premiere One LP exhibition was held in New York at the ARChive of Contemporary Music in 2014 and subsequently shown in Los Angeles during the Britweek arts program.A?The project – conceived in the jazz world has been extended and now includes around 200 people in manifold occupations in the creative milieu – artists, academics, musicians, broadcasters, writers and photographers.

A?The exhibition at Birmingham City University is the most comprehensive to date and reflects the position of jazz as the most diverse of musical genres.A?The artists featured in the exhibition range from innovators whose provenance reaches back to the genrea??s birth through to leading and emergent contemporary artists. A?This pantheon includes figures such as Al Jarreau, Annie Ross, Sheila Jordan, Jon Hendricks, Gregory Porter, Benny Golson, Jimmy Heath, Joe Lovano, Kenny Burrell, Mike Stern, Ron Carter, Marcus Miller, Lonnie Liston Smith, Robert Glasper, Michael League, Soweto Kinch, Tomasz Stanko and Christian Scott.A?Whilst One LP is a mature and rapidly-growing project, William is constantly seeking opportunities for collaboration to further develop the series, and welcomes proposals and dialogue re: subjects and directions.

William Ellis was born in Liverpool in 1957, developing his distinctive style encompassing portrait, performance and still life images of musical instrument via study and appreciation of the work of a wide range of artists and fellow photographers.A?His breakthrough into jazz came with the opportunity to photograph Miles Davis in 1989. William has since worked with many of the worlda??s leading musicians.A?William’sA?work is exhibited extensively at international level: it is held in private collections worldwide and those of major institutions including the National Portrait Gallery London, the ARChive of Contemporary Music in New York and the American Jazz Museum in Kansas City MO.

Williama??s photographs have been used in the JAM (Jazz Appreciation Month) Outreach program in the United States initiated by the Smithsonian Institution.A?They also appear regularly in print/online publications, and are used by record companies in artist promotion. William has a regular column on One LP in Allaboutjazz.com

This photo is Copyright A? William Ellis. All rights reserved.